If you enjoyed our Seven Secret Chicago Art Displays piece from a few years back, then you're in luck! Author Jessica Mlinaric is back with a list of Chicago gems that you can get to within walking distance while still practicing social distancing. If you enjoy the article, make sure to pick up her book Secret Chicago. We'll let her take it away! 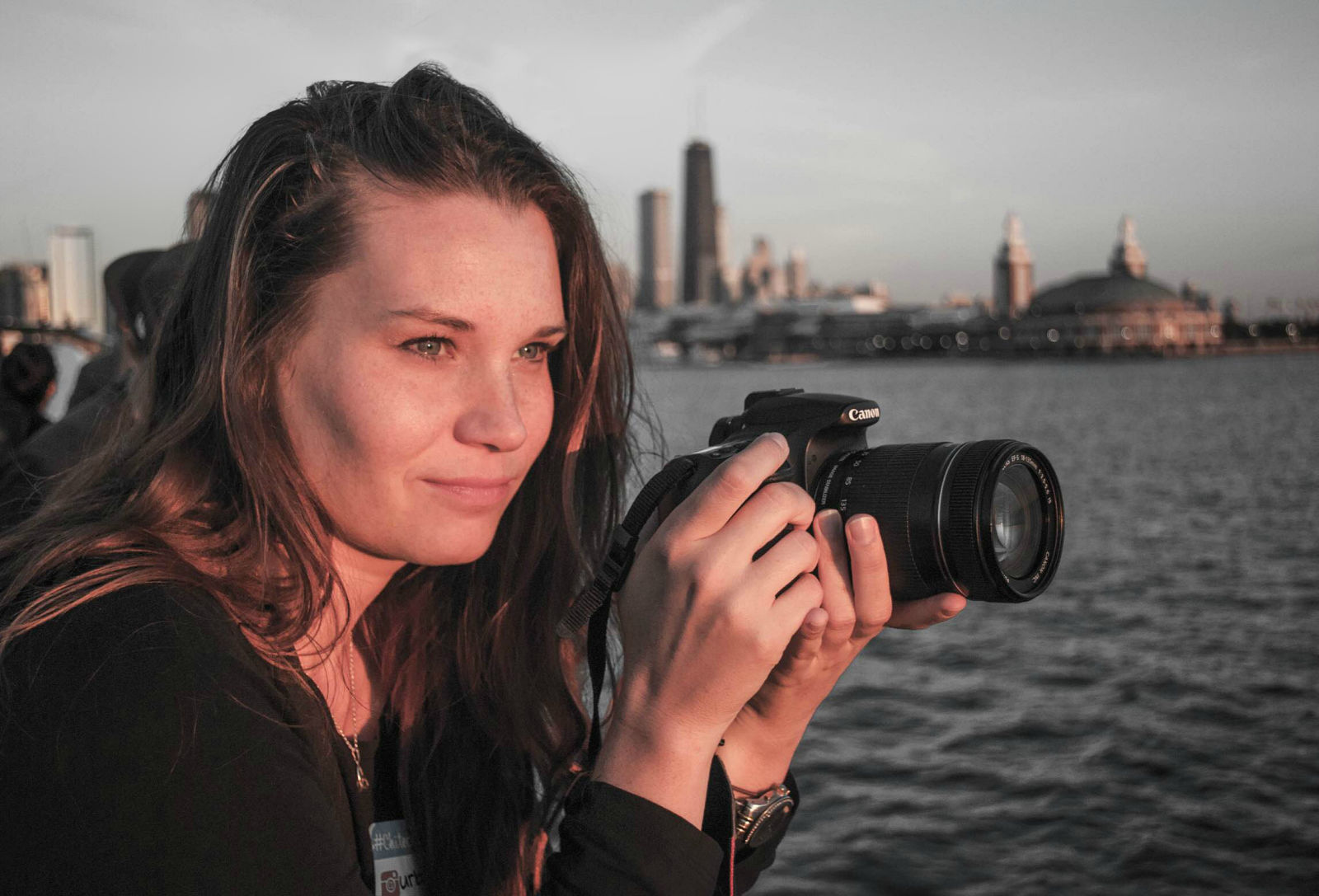 Now that our travel is limited, a quick walk around the neighborhood has taken on a new significance. There’s never been a better time to give familiar places a second look and learn something new. That’s why I'm sharing some spots from the book Secret Chicago: A Guide to the Weird, Wonderful, and Obscure that can be enjoyed outside from a distance while you’re getting some air. Uncovering a neighborhood secret offers the thrill of discovery in your own backyard. Just be sure to explore these hidden gems while abiding by social distancing guidelines. #secretsocialdistancing 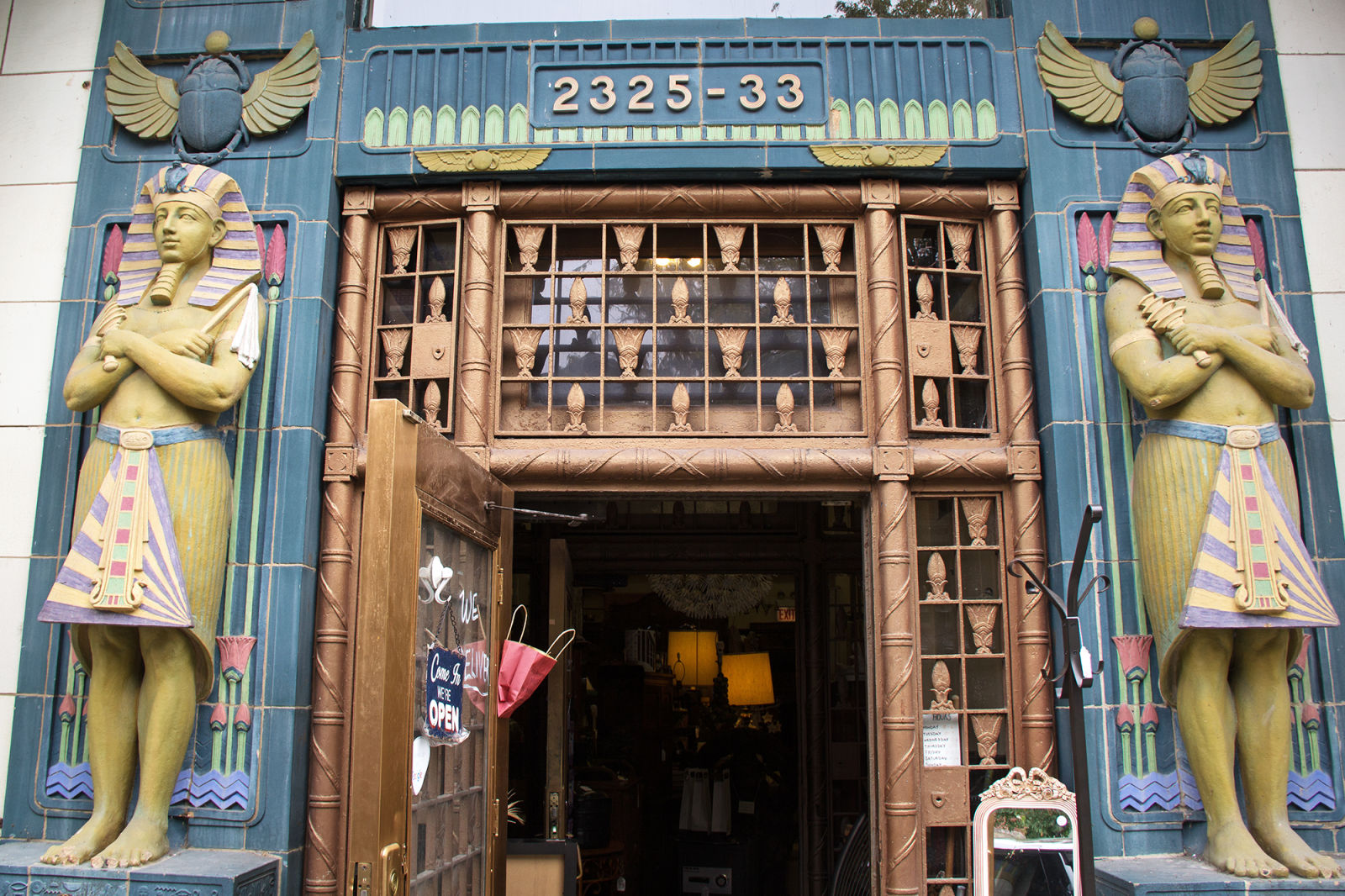 The Reebie Storage and Moving Co. building in Lincoln Park caught my eye when I moved to the city a decade ago and took walks around the neighborhood. It was built in 1922 at the height of the Egyptomania craze brought on by the discovery of King Tut’s tomb. The entrance features vibrant terra-cotta sculptures of beetles, lotus leaves, and the faces of the Reebie brothers as pharaohs! 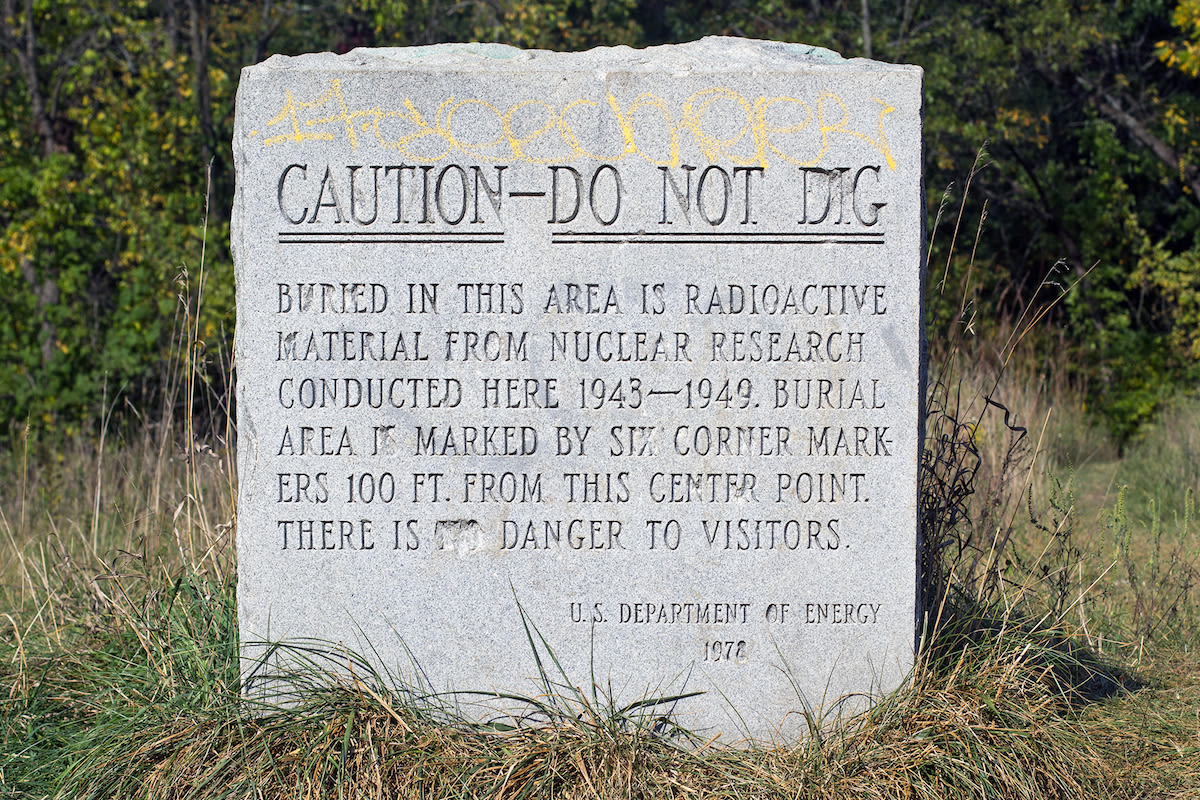 Site A and Plot M

Watch your step strolling through the Cook County Forest Preserve, you might stumble on a buried nuclear reactor! The world’s first nuclear reaction took place in Chicago, and the reactor moved to a nearby research facility. When the lab was decommissioned, the reactor and nuclear waste were buried in the woods. It’s safe to look, but just don’t dig! 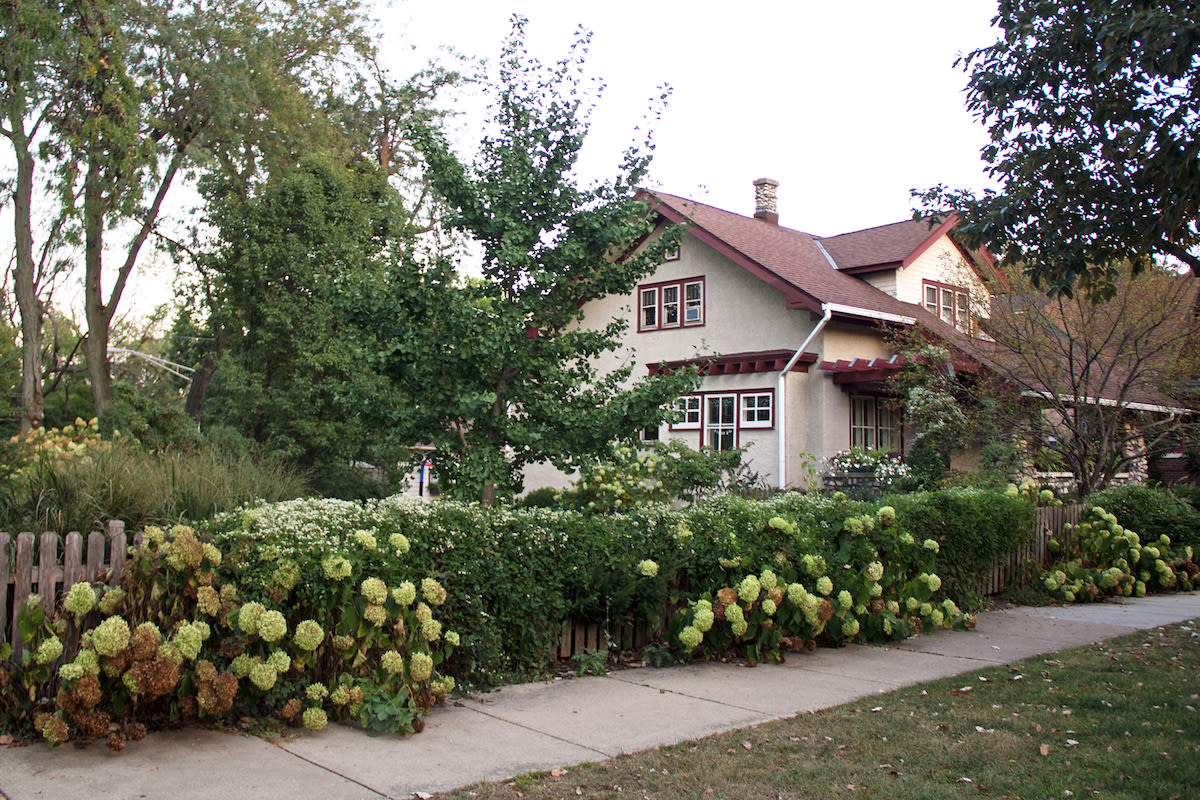 Chicago’s smallest neighborhood is a lovely place to take in some air while social distancing. The Villa District is a 126-home micro-neighborhood on the Northwest Side. One of the city’s first planned developments, it was built in the early twentieth century for wealthy Chicagoans to escape urban congestion with charming homes and double-wide lots. Admire its hodgepodge of architecture and stone pillars at every corner. 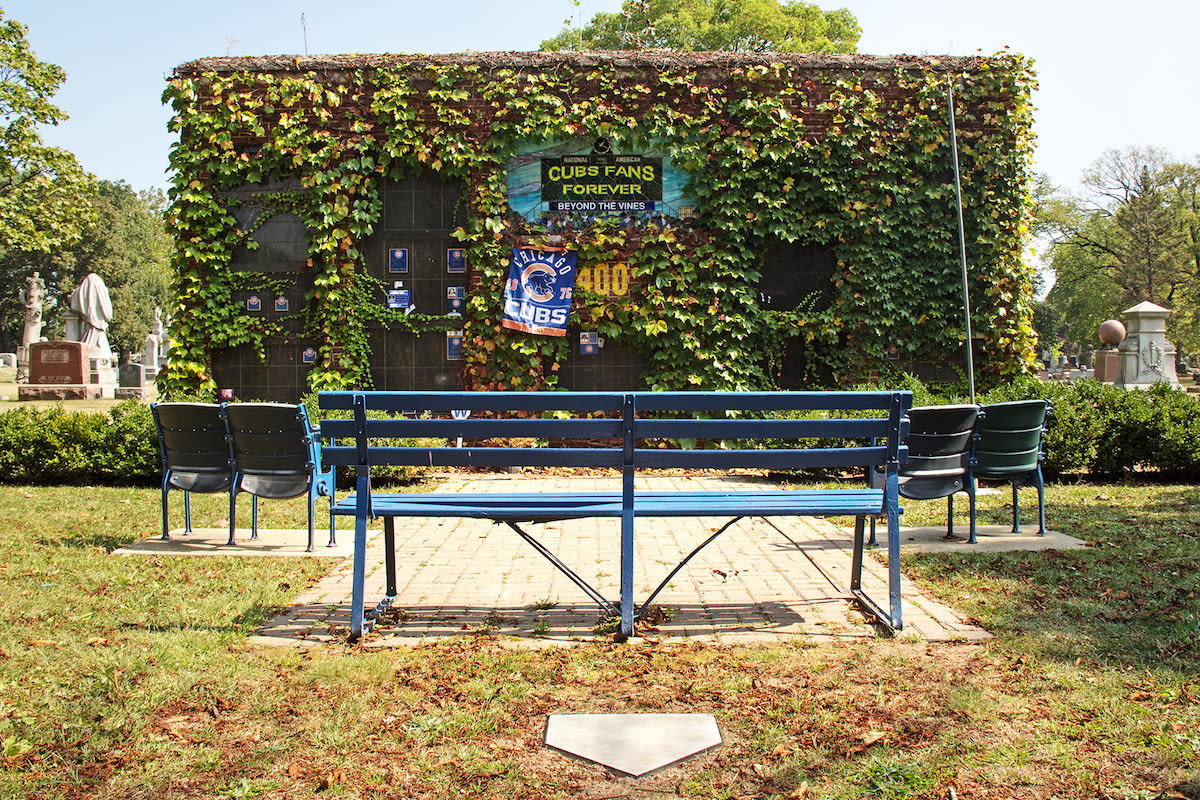 If you’re missing baseball season, you can admire some vestiges of Wrigley Field... in a cemetery. Bohemian National Cemetery is home to a plot called “Beyond the Vines.” The resting place built for Cubs fans includes a bench, stadium seats, home plate, turf and more from the Friendly Confines! 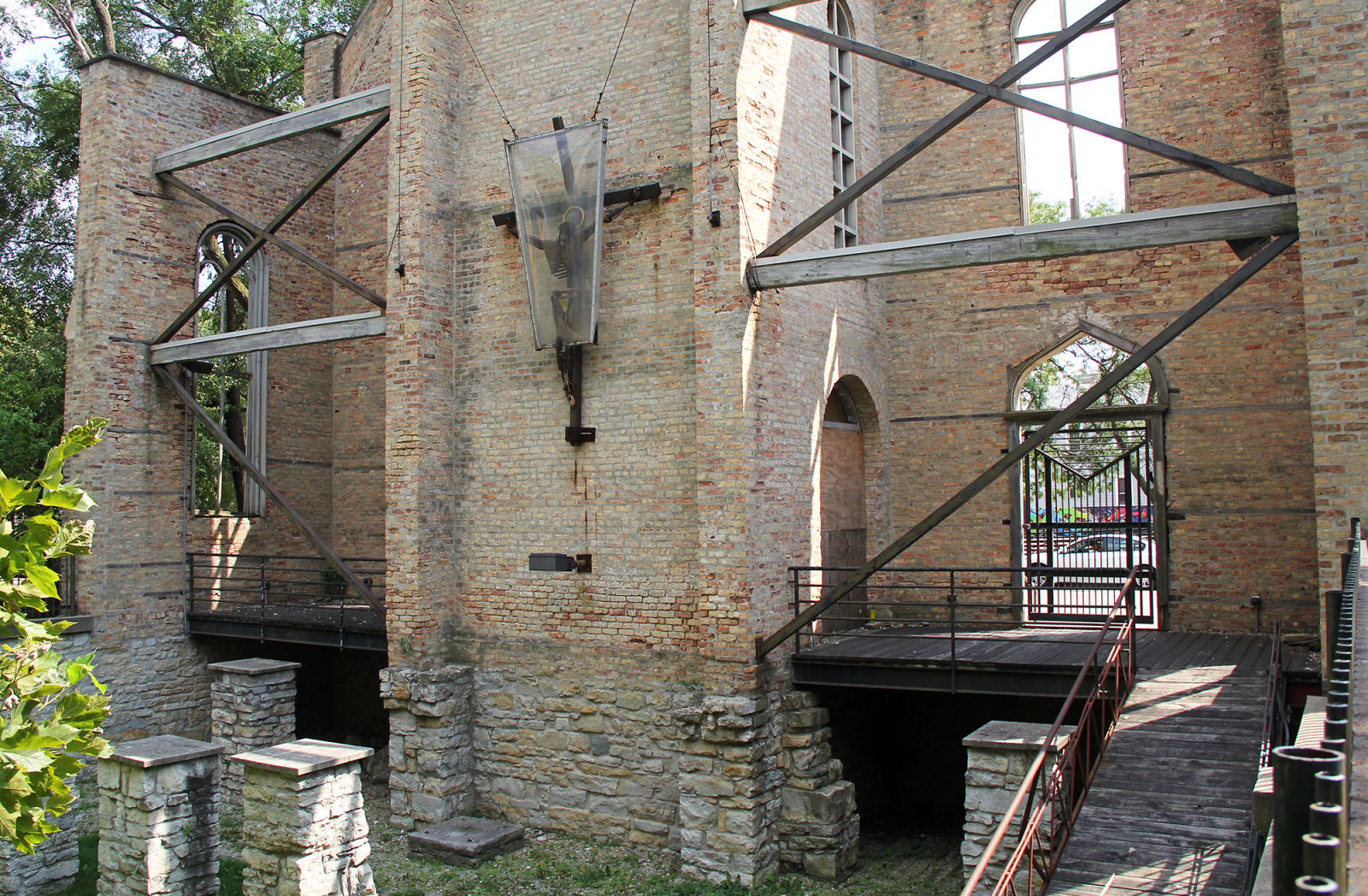 From the front, it looks like a normal church, but in the back, it’s a preserved relic of the past. This Pilsen church was built in 1880 by the German Lutheran congregation. After a fire and a windstorm, it was almost destroyed by 1998. Descendants of the original congregation delivered the owner a book about the church’s history, and he decided to save what was left of the building. It stands as a surprising symbol of the neighborhood’s past. 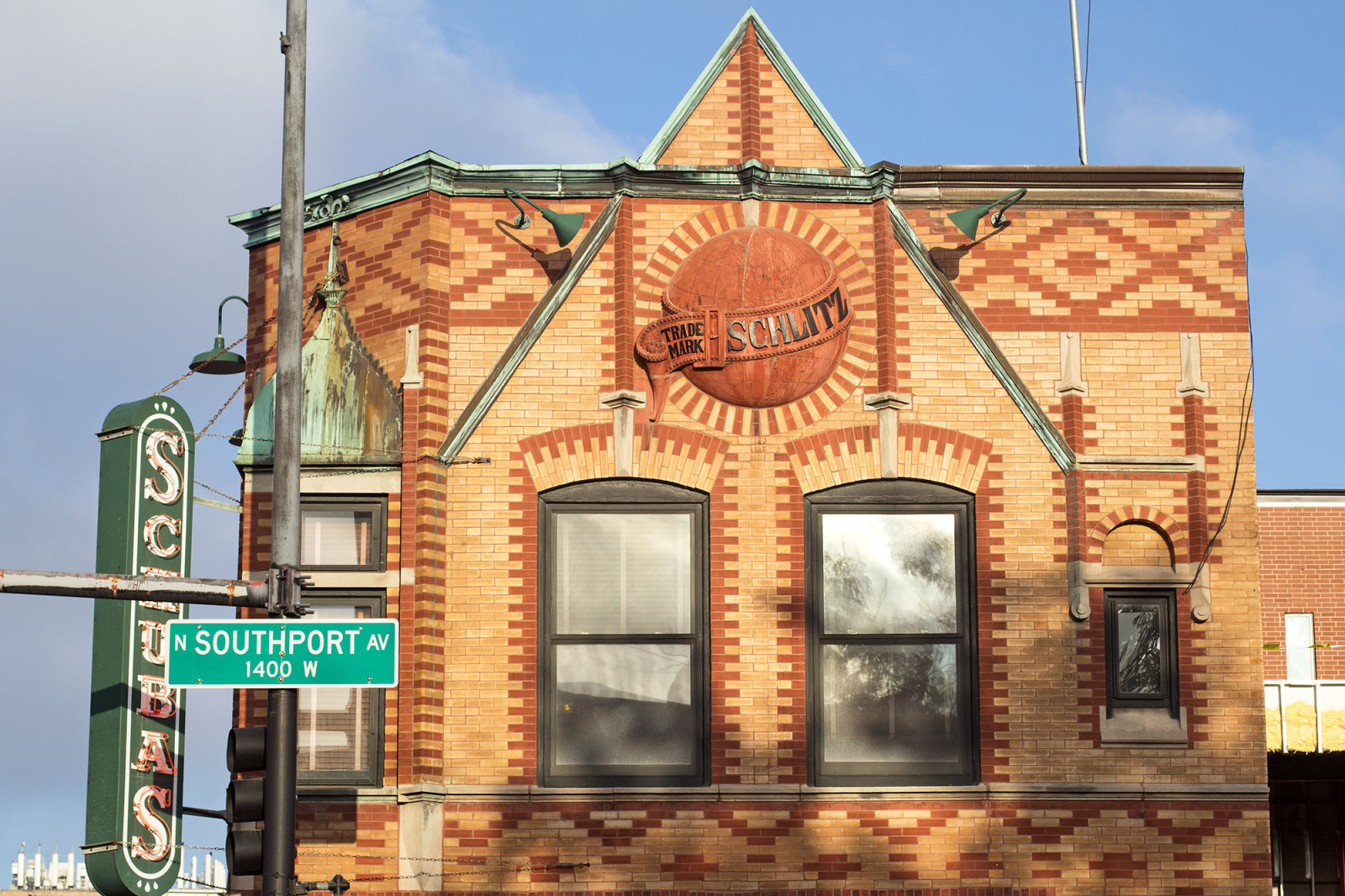 If you’re strolling Chicago’s neighborhoods, chances are you’ll see a painted globe carved into a building’s facade. It’s more than decoration, it’s a symbol of the city’s hard-drinking history. Before Prohibition, these buildings were “tied houses,” or saloons owned or subsidized by breweries to sell only their beer. About 41 tied houses survive today, with Schlitz being the most common. 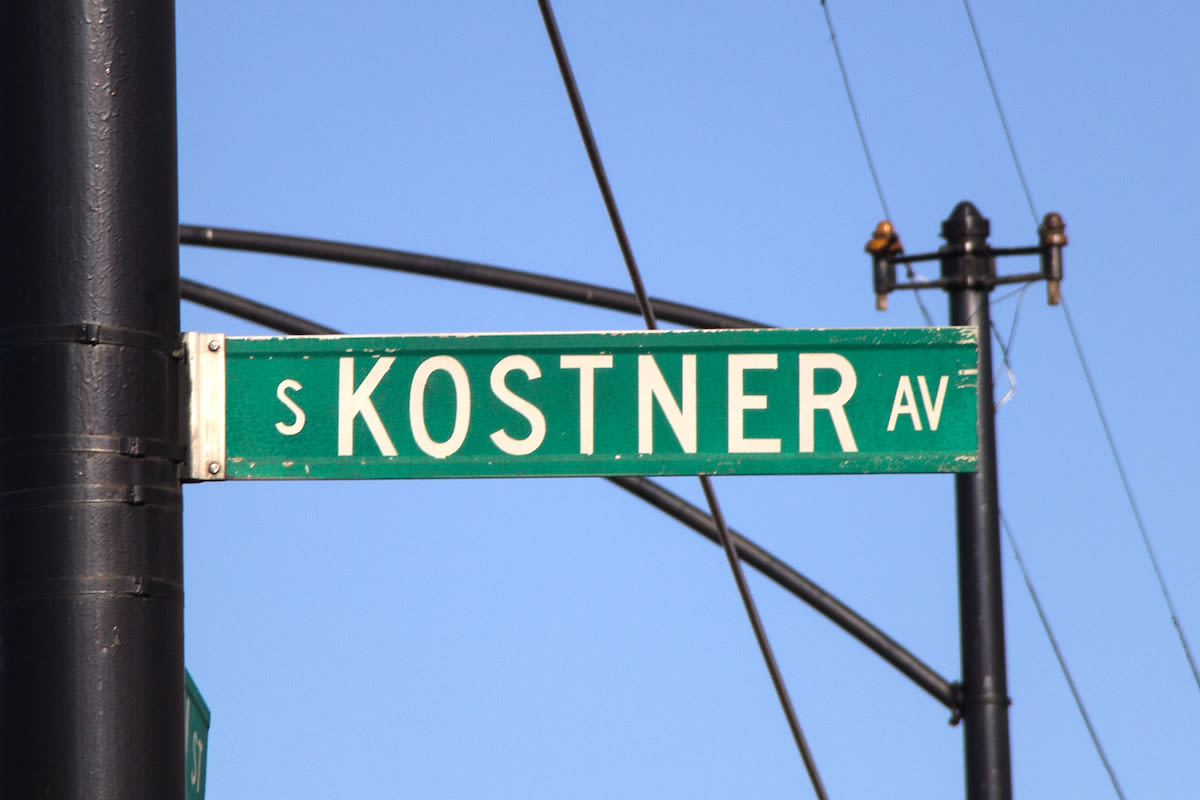 If you’re walking west of Pulaski, you might notice the street names begin to blend together - Karlov, Kevdale, Keeler… It’s no coincidence. Chicago’s north-south streets were renamed in 1913, beginning from “A” one mile west of the Indiana border. They didn’t bother replacing established street names, so the system started with newer streets on the West Side. Next time you’re strolling Mango Street, you’ll know you’re thirteen miles from the state border. 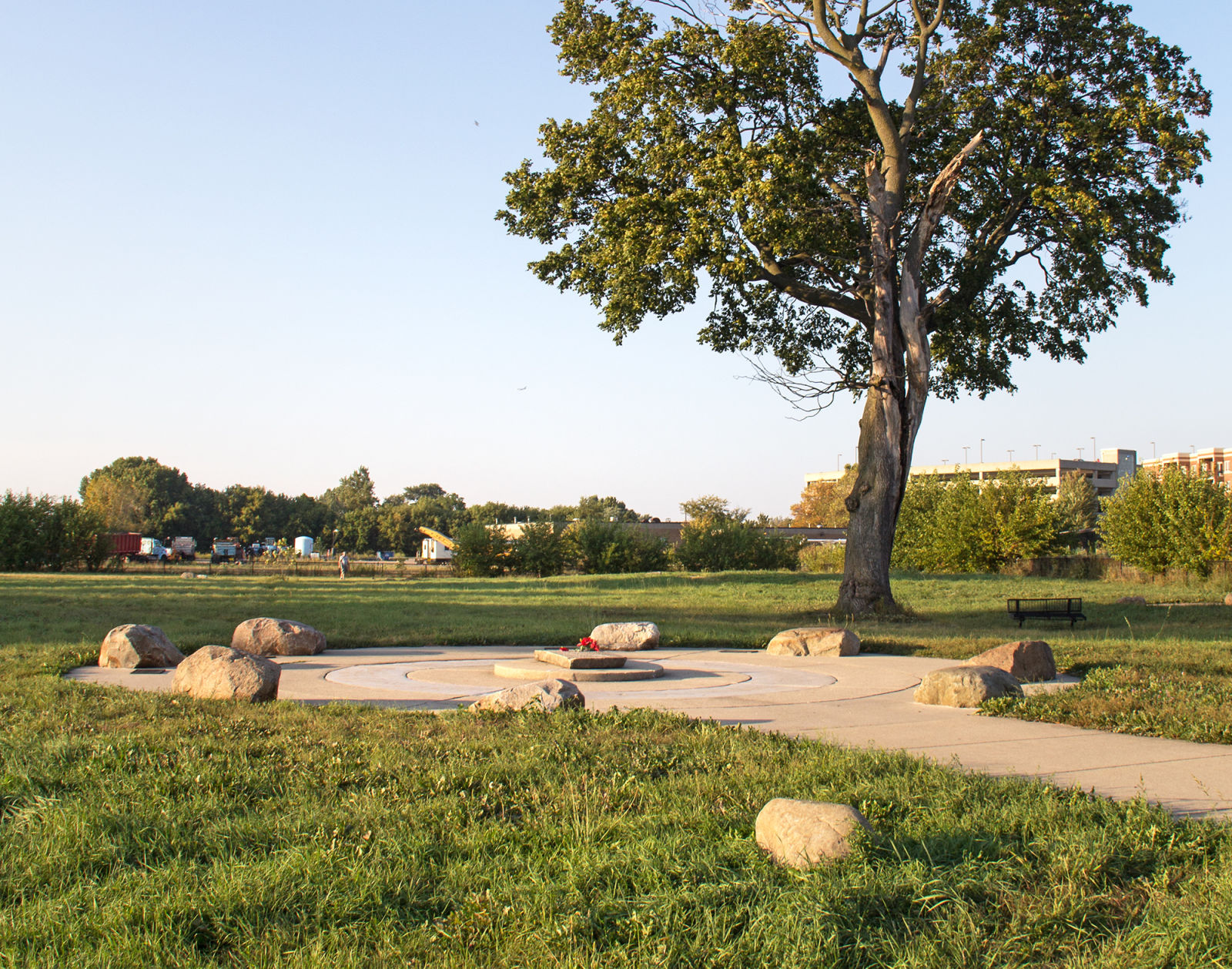 This peaceful park in an open field is a nice place to find solace on the Northwest Side—until you realize where you’re standing. The area was once home to a poorhouse and then the Cook County Insane Asylum. It also included about 38,000 graves of residents and other unfortunate or unknown people. They were forgotten once the facilities were demolished until developers started digging decades later. Now they are resting peacefully in the park dedicated to their memory. 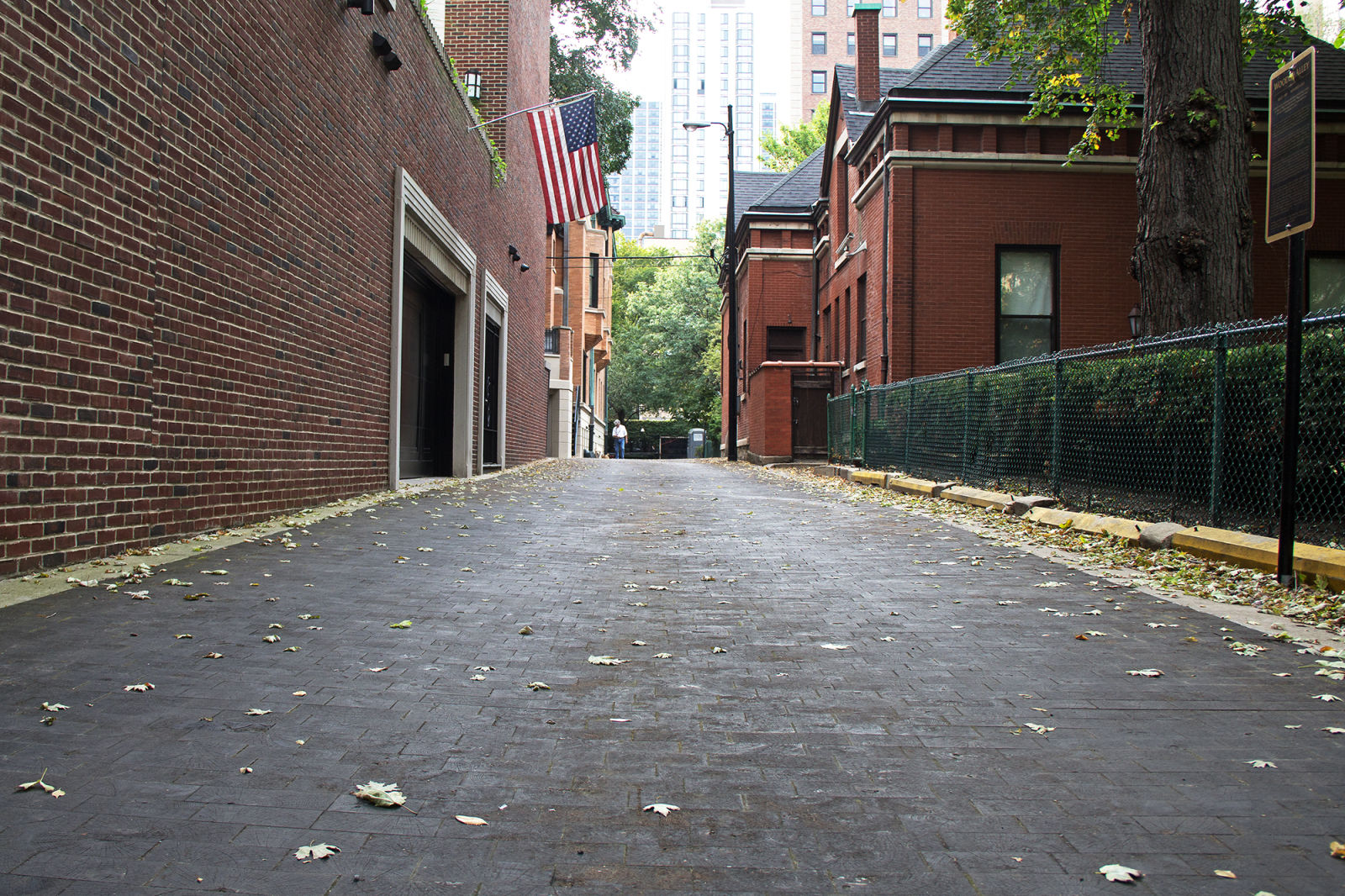 Once upon a time, in the mid-19th Century, Chicago’s streets were paved with wood. It promised to be cheaper, cleaner and quieter than stone. It even held up pretty well against the Great Chicago Fire. These days, there are only a few places you can find traces of wood paving. The best example is located in the Gold Coast in the alley between N. State Parkway and N. Astor Street. It was restored by the neighborhood association for $400,000! 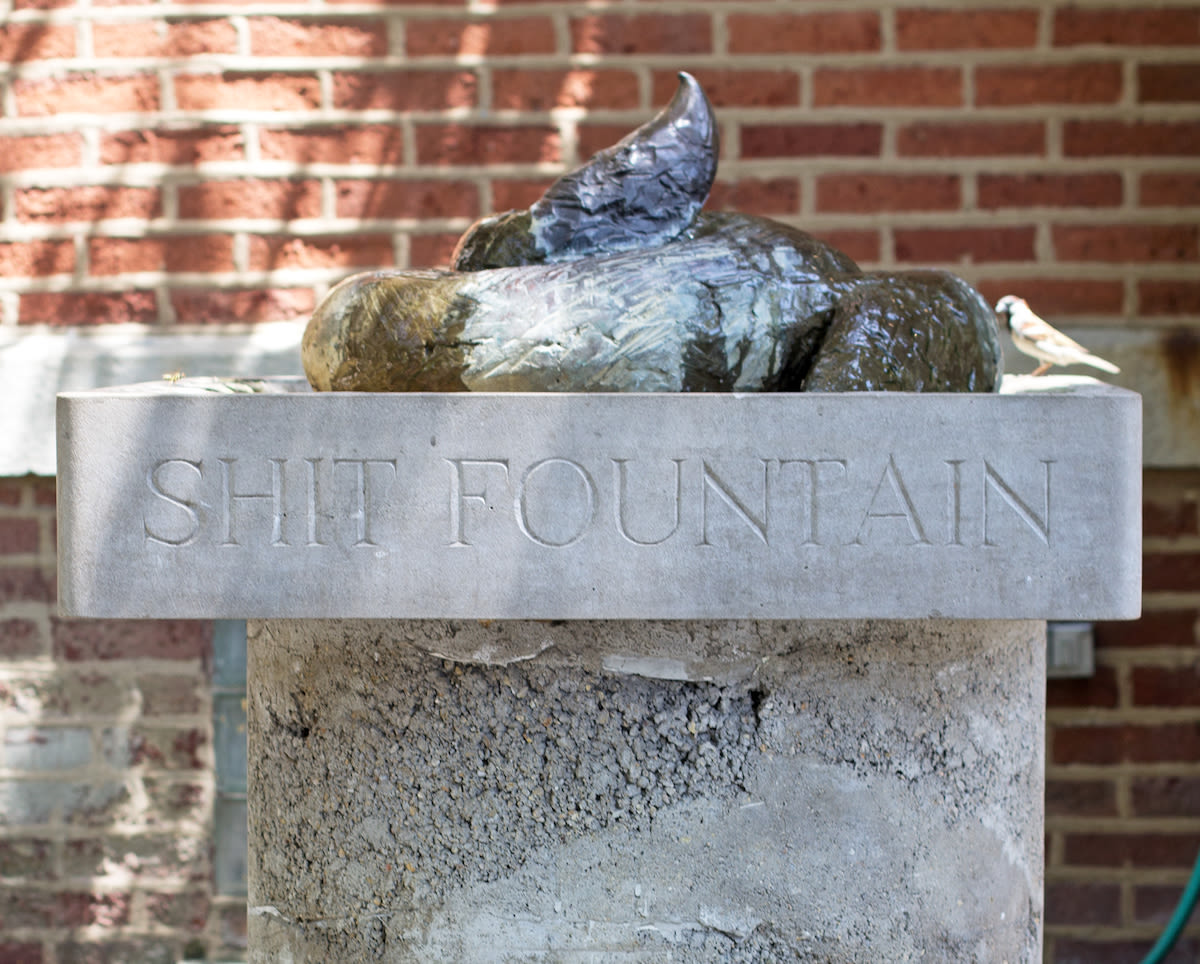 Ukrainian Village is home to a lovely bronze sculpture perched on a sandstone column and a gently trickling fountain. The sculpture depicts a coil of crap. Chicago artist Jerzy S. Kenar created and installed the fountain on his property to remind passing dog owners to clean up after their pooches. 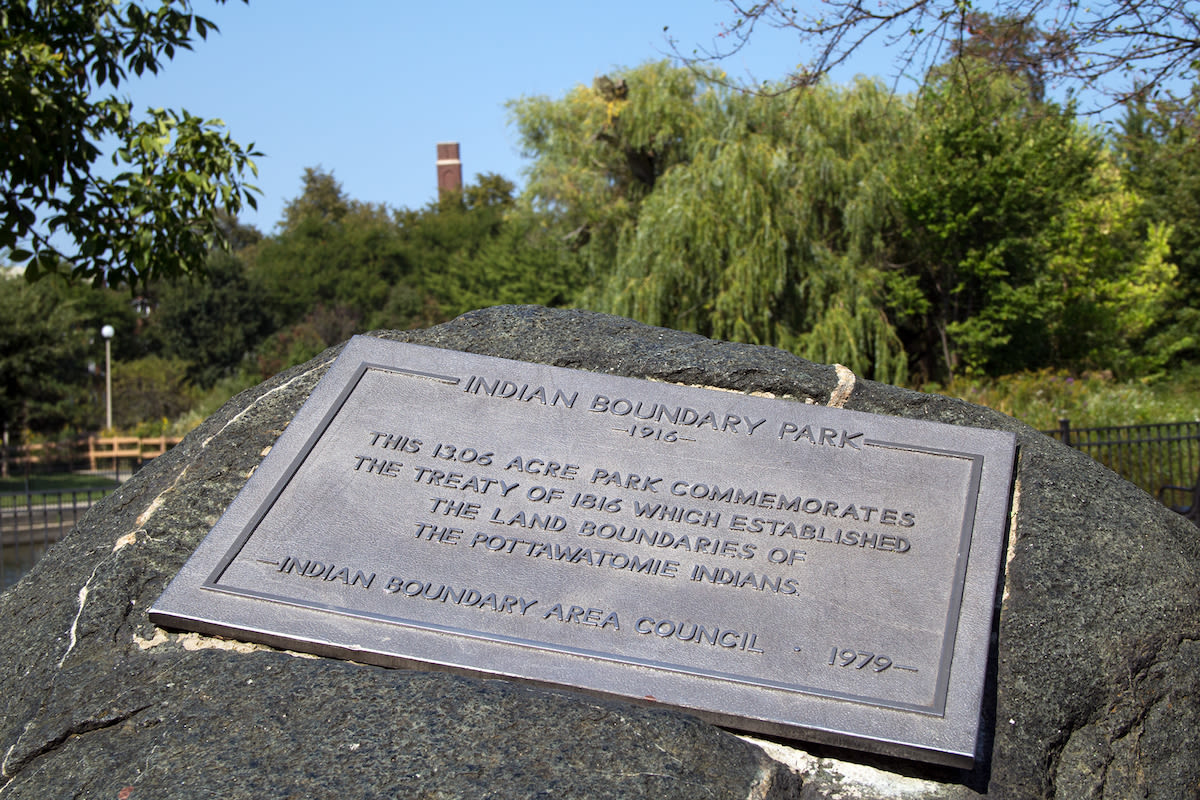 Rogers Avenue in Rogers Park is a bit of living history. It started as a Native American trail and then marked the dividing line between native and white settler lands after an 1816 treaty. A plaque at Clark Street and Rogers Avenue commemorates the historic boundary, but the city has hidden it behind a traffic light controller. Fortunately, it’s also commemorated by the lovely Indian Boundary Park which is located on the old trail line. 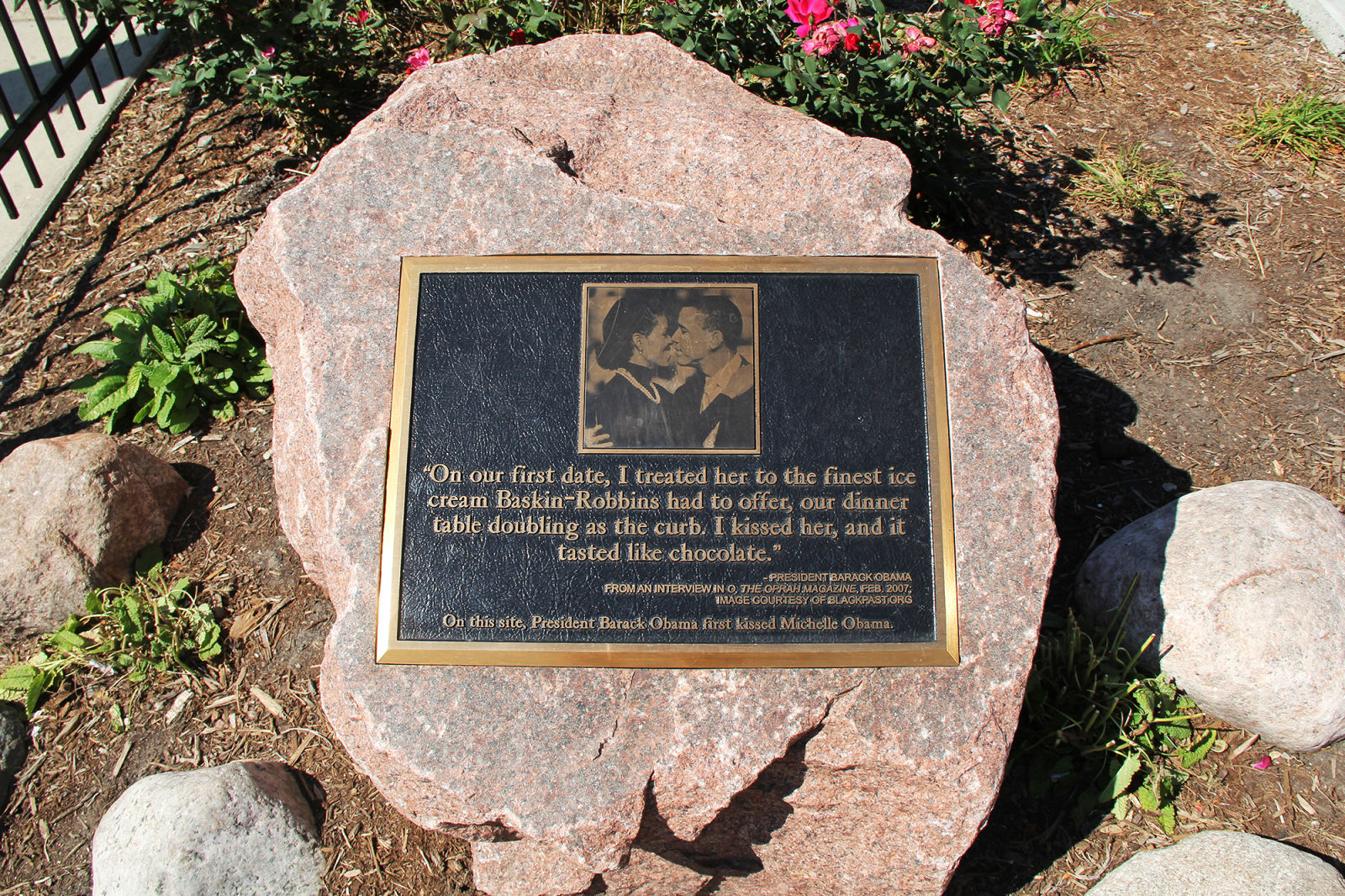 If you’re walking around Hyde Park, don’t forget to look down. You might run into some famous faces. A shopping center on bustling E. 53rd St. boasts a granite boulder and plaque marking the sweet start to a relationship. This is where a young Barack Obama shared a first kiss with his future wife, Michelle, in 1989. So much for social distancing. 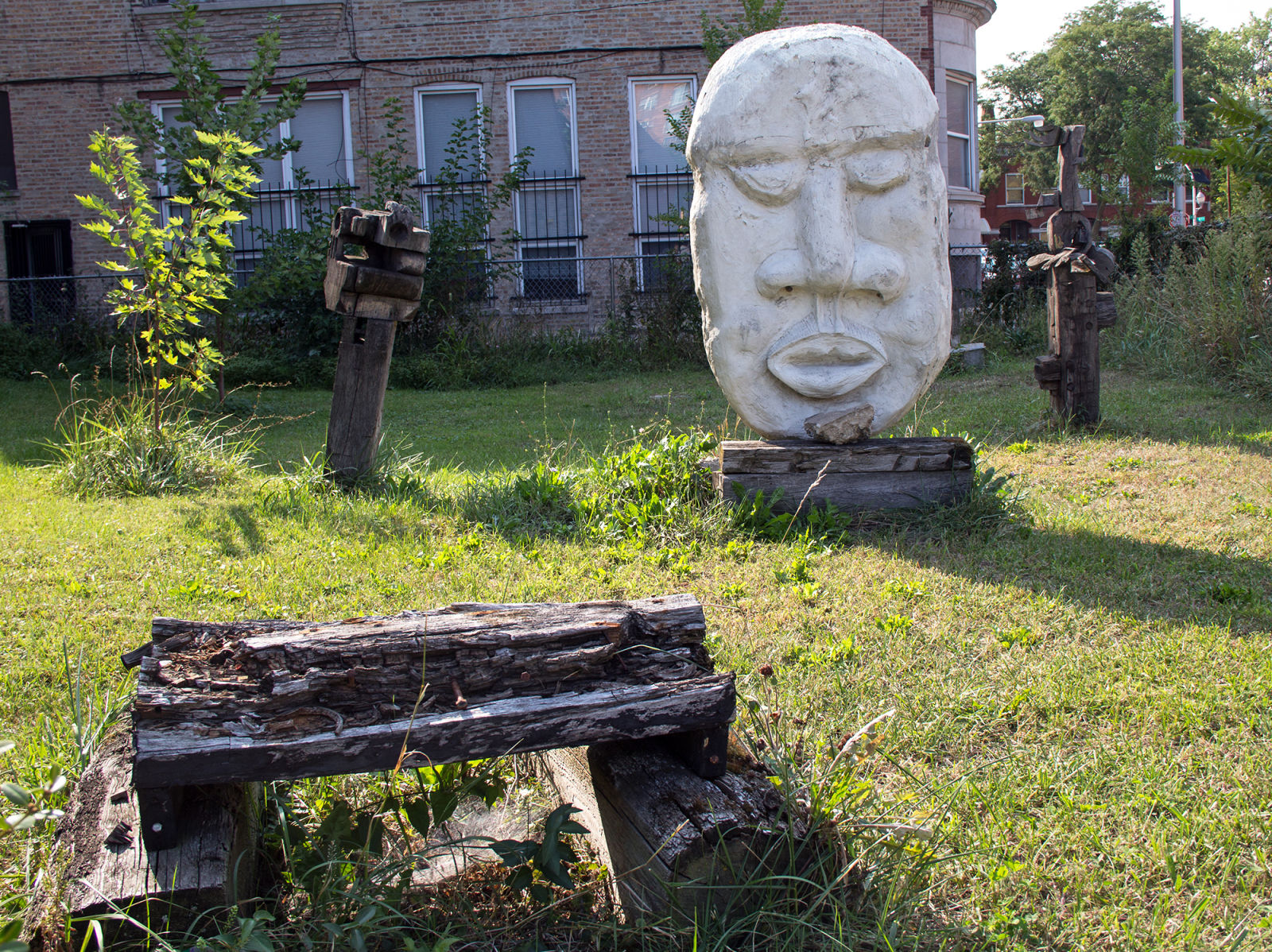 The Oakland Museum of Contemporary Art isn’t listed in guidebooks next to the Art Institute, but it’s a landmark of the North Kenwood and Oakland community. The late artist Milton Mizenberg set out to improve his community by turning tree trunks into sculptures and filling vacant lots with art. The gardens are still maintained by neighbors. 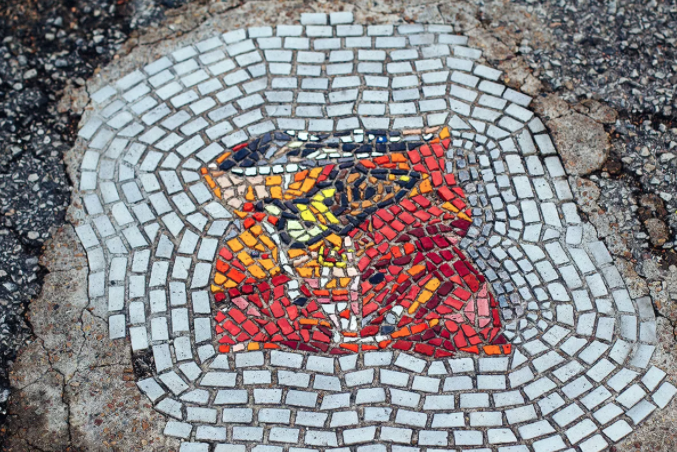 Since 2013, Jim Bachor has transformed infrastructure craters in Chicago and around the world into public art. The mosaic artist fills potholes with art instead of asphalt. Use his map of installations to go on a pothole mosaic scavenger hunt.

If you want to learn more, pick up Jessica's book Secret Chicago: A Guide to the Weird, Wonderful, and Obscure. Happy exploring, and remember, practice social distancing!

*All photos courtesy of Jessica Mlinaric